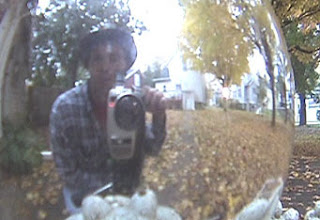 The first time i ever heard of the Paulding Light was back in 1999 from a friend of mine who visited it some years earlier and had an experience that not only captured my imagination but inspired me to learn more about this phenomenon and green light the movie project. The following is his story....Enjoy!!

Back in about 1995 a group of friends and I decided to go up to the Upper Peninsula of Michigan for some fun and an adventure. The adventure for me was to see a phenomenon of which I heard a lot of stories about, but had yet to experience. My friends had been telling me about the Paulding Light in the Watersmeet area of Michigan...a blink town in the middle of a heavily forested area with your basic small local bars, a gas station and a Casino that seems to exist with no rhyme or reason. The "Light" itself, has much lore behind it, including the story that a train track inspector was struck in the course of his job and never knew he died, and is now still out performing his duties, lantern in hand, which is the light we still see to this day.

We (about six of us guys in the 25 year old range) arrived in Watersmeet at night. The Paulding Light can typically be seen on a remote road off I-45 called Robin's Pond located in the State Forest area. The road is about a half mile long lined with heavy woods and comes to a dead end with a guard rail stopping you from going any further by auto. Past the guard rail is a ravine and then a large hill that looks to go forever. That night there was a constant light rain, almost just a mist, with no light due to the clouds and the never ending forest up there. There was no one out on the roads at all, most likely due to the weather, where most people would rather be inside watching a movie or sleeping for that matter. Like all good horror movies, we decided to subject ourselves to the "Light" at about 2am. We took our friends Chevy Suburban out that night because there were about 6 of us. We drove to the dead end and parked. I was extremely skeptical because I've never seen anything like a ghost, nor did I believe in anything like that. I figured it would be like anything else, where I would hear all kinds of stories but not see anything for myself. We sat for about 10 minutes and to my amazement a very noticeable white light appeared on the horizon. I would describe it like one car head light, but at times a lot more intense. For some reason there was a red light always hovering near the light as well; similar in color to an infra red beam, but it didn't glow toward us. The white light moved at times in a figure eight motion, swinging, or almost appearing as if someone was running down a hill with a lantern at a rapid pace. I'd be lying to say I wasn't at all scared, quite a bit amazed and in a weird sort of way hoping to see even more. I guess I got my wish because a few minutes later, the red light was in the pine trees right along side of our vehicle! It's a pretty odd feeling sitting in a locked vehicle in the middle of nowhere with an intense red light shining in the tree right above your vehicle. We started to argue that it could be some crazy guy sitting in the tree with a gun and infra red sighting on us. My friend Bob had binoculars and decided to take a better look, if possible and started focusing on the road ahead of us. Not more than 2 minutes went by and he threw the binoculars on the floor and said we had to go ASAP! He said he saw a dark figure walk across the road in front of our truck that looked just like the Grim Reaper; with sickle and all! We all laughed (nervously) and another guy tried the binoculars hoping to discredit Bob. Unfortunately he said he seen something similar but described it more like a witch with a pointed cape or hat. At that point, although I had seen some pretty bizarre things that night, I still didn't believe any of them about a "Reaper" and decided to try the binoculars for myself. I never did see a witch or Reaper, and by that time everyone was eager to leave.

By the time we left I was very impressed with the Light itself, but just couldn't believe that anyone had seen the Grim Reaper, until I heard my friend Scott's story the next morning. Scott was one of us six that was in the Suburban that night. He took his turn and tried to see the Reaper with the binoculars also, but didn't see anything and was skeptical like me. Scott was staying at a small cabin up in that area with some friends that would arrive later that night. When Scott arrived at the cabin, his friends were already there. He was hesitant to tell them about anything other than just the Light for risk of being ridiculed about the Reaper. When he was about to tell them about the light, he was interrupted by one of his friends. The friend said that he was dating a girl who came back to the cabin one night terrified because she went by herself to see the Paulding Light, but instead saw something that looked just like the Grim Reaper! From that point on, I was convinced that something like The Grim Reaper was seen that night.

I've been up to see the Paulding Light many times after, and each time has had its share of mysteries...but I'll leave those stories for another time! Take a look for yourself...maybe you'll meet the Reaper!

You have to agree that's a fascinating story. The author and witness is Randy Fox who is good friend of mine and agreed to be in my movie and tell that same story as i added it to the script. I myself have been up to Paulding twice and have yet to see the Grim Reeper. However as luck would have it, i have been fortunate enough to have seen the Paulding Light both times. What is it? I initially thought i had it all fiqured out, however it seems some tests were done by the Syfy show 'Fact Or Faked' who ended up debunking my theory. So it looks like I wasn't able to shed any "light" on the mystery after all!!

The Paulding Light also known as "The Dog Meadow Lights" have been a mystery in Upper Michigan for over 60 years. I first witne...