The Paulding Light also known as "The Dog Meadow Lights" have been a mystery in Upper Michigan for over 60 years. I first witnessed this strange light in February of 1999 and again around Halloween 2001. Both times while viewing this phenomenon, the ghost light would slowly move towards us floating in mid air as if someone was carrying a lantern. As it started to get closer it would vanish and start over again each time moving towards us a little faster! Legend has it that one night around sixty years ago, a railroad switch man while holding his lantern was crushed to death between two cars while trying to signal the engineer. Others claim that an engineer was murdered along the old railroad grade that runs parallel to the road the light appears. 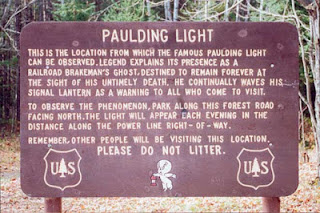 Another story tells about a man out late one night carrying a lantern looking for his lost little boy in the woods. Supposedly, the man was hit by a train and his ghost continues to search for his son! Some people even have claimed to have seen the "Grim Reaper" floating across the road near the light!! Skeptics say it is nothing more than car lights in the distance or glacier gas. But no matter what it is, you are still fascinated and spooked while viewing this bizarre light as it starts walking towards you!! I ended up using these clips in my movie by the same name.

The Paulding Light also known as "The Dog Meadow Lights" have been a mystery in Upper Michigan for over 60 years. I first witne...